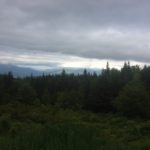 On June11-13th two member of the Cardigan Highlanders, our venerable trail master Craig Sanborn and myself, attended a rigging and griphoist course taught by Jed Talbot of OBP Trailworks. This great opportunity was hosted by the White Mountain Trail Collective. We learned alongside members of the RMC, AMC, and rangers from the Saco and Pemigewasset districts. The course had both classroom and experiential learning that went over the basics of components, safety, and applications of rigging. As the course progressed we learned more about the minutia of ground operations (dragging rocks and logs) and aerial operations (using skylines or double high leads to fly objects above the ground).

Day one was primarily in the classroom, located in the conference room of the Bartlet Experimental Forest center, where we dove into an overview of rigging for trail work. The slideshow and lecture covered the historical and contemporary industries that trail rigging draws from, calculating maximum load on a system and its components, establishing mechanical advantages, and many more specifics on gear and systems. We ended the day by splitting into groups and beginning to set up systems around the property to achieve various tasks. We worked with the lovely folks from the Saco district to move a stone of considerable size using their one ton griphoist. Our efforts to budge this burly boulder with a straight drag and a then a 2:1 mechanical advantage led nowhere. The day drew to a close and we picked up again in the morning. 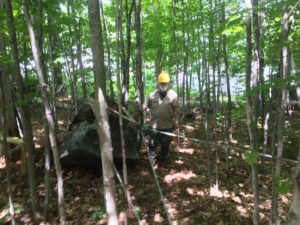 Craig standing by the stone and rigging

At the beginning of day two we continued to work on our respective problems. Our group set up a 4:1 mechanical advantage. This uses two power blocks and a directional block to convert the 2,000lbs of force at the hoist to 8,000lbs of force exerted on the load 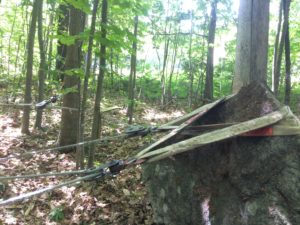 This was not only exciting, but also successful! We surveyed the other groups’ work and then settled in for more classroom instruction on aerial systems. The addition of verticality makes these systems more complex. After going over angles and setups on paper we did a practical demonstration by setting up a skyline with tripods and using a dynamometer (an instrument that measures forces) to show some of the nuances of line angle in an aerial system. After this we finished up the day by hiking in some gear to the Crawford Path where we would work the next day.

The course culminated with a practical application of the previous days. We hiked in more gear and picked up what we stashed on the day before. Craig and I split up to work on the two separate job sites. The group I was with was tasked with moving several large spruce logs that would ultimately be used to make cribbed steps on an area with a considerable side hill droop (this happened to be a stone’s throw away from the scenic Gibbs Falls). The group divided further and my sub-group worked on moving a log downhill of the site up with a one ton hoist and a belay to control the far end of the log as we moved it. The other group worked on setting up a high lead so we could ultimately use a double high lead to move another log up hill to the work site. A double high lead uses two hoists and two spar blocks to lift the load, and then the two hoist operators coordinate to pull tension and release slack in unison to move the log.

While this was happening Craig worked with the other group to set up a skyline system where one hoist is used to tension a high line and lift a load which is then moved on a travel block. This particular application was moving large stones to be used as scree. Near the end of the day we switched sites to get a taste of the different systems. After that we broke down and packed out all the gear and met as a complete group one more time. 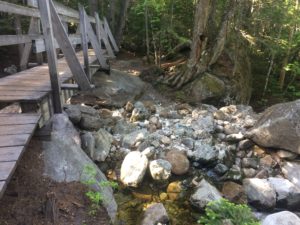 A snap shot of the hike up

This was an excellent opportunity for me. I enjoyed meeting and learning alongside folks from a variety of organizations. I walked away from this experience with a good understanding of basic rigging and its applications for trail work. I’m confident that I’ll be able to implement the concepts that we learned with gear that the Highlander’s currently have and that I’d be comfortable using heavier gear if we ever see the need to acquire it. Most importantly I learned a lot, got to play in the woods, and had a great time!