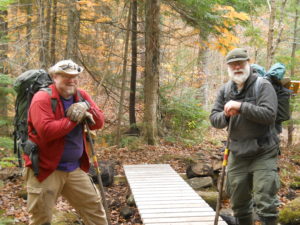 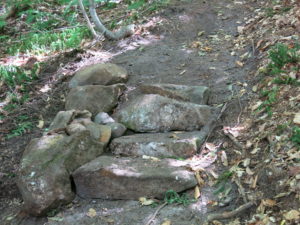 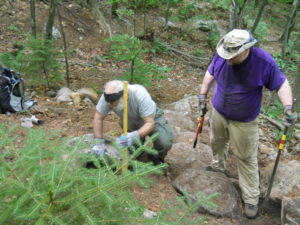 This timeline totals 17,832 hours through 2021, but it lists only a snapshot of highlights and new work. Each year we tend to routine preventive maintenance on 16 miles of trail.  That work includes cleaning about 200 waterbars Spring and Fall, painting blazes, trimming brush, chopping blowdowns and saving them for log fixtures.

We tend 10 miles of trail on Mt. Cardigan plus 5 miles on Mt. Sunapee, one mile on Shaker Mtn., and a half mile on Mt. Kearsarge.  We visit other people’s trails from Monadnock to Franconia Notch, and consult with them on trail design, bridges, and fixtures.

We may be the most active volunteer trail crew in the west highlands of New Hampshire.  We welcome volunteers willing to work to our guidelines.  There is always more work than workers, anyone can learn the skills, and we can usually adapt the work to fit anyone fit enough to hike to the jobsite.

1985, June 18:  NH Division of Forests and Lands lets us volunteer to maintain trails on Mt. Cardigan

2000, 461 hours: Many fixtures made of salvaged blowdowns.  Moldering privy at Crag Camp.

2020, 664 hours: The covid pandemic presented new challenges and necessitated altering our plans, but we still managed 90% of our average of the last 5 years. Volunteers patrolled 16 miles, cleaned 200+ drains (twice), set 44 rocks, refurbed 5 log fixtures, demoed and completed replacement of the Cole Pond Trailhead bridge. We turned out and worked safe when most needed.